What Is Physiotherapy Led Pilates? 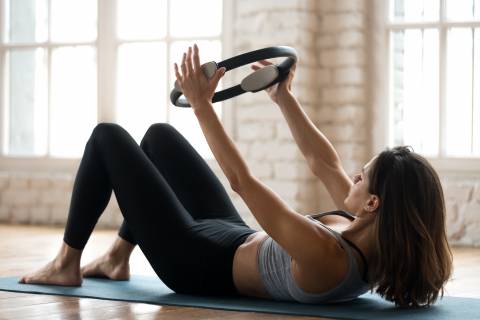 Pilates is a form of exercise that builds up core strength, flexibility, and body awareness and is designed to promote efficient movement. It was originally developed by Joseph Pilates in the early 20th century. Since then, Pilates has been adapted and is now widely used in in classes and in rehabilitation by Physiotherapists worldwide. Personally, I like to think of Pilates as a movement class – it teaches you how to move your body in the most efficient and functional way. The movements are performed in a variety of different postures that can translate to your day to day life by resetting your postural habits and movement patterns.

What Happens In A Pilates Class?

During a Pilates class you are guided through a series of exercises using core control, correct muscle activation and breathing control. The exercises are designed to improve the mobility in all the major joints, strengthen and stretch the major muscle groups, engage the core stability muscles as well as activate the proprioceptive and balance fibres. The quality of each posture, engagement of the correct muscles and breathing in connection with the movement are key components of the movements.

What Are The Benefits of Physiotherapy Led Pilates Classes?

Physiotherapy led classes have a small number of participants so that all participants can be observed and guided through the exercises in a safe and effective way. Physiotherapists are able to modify and adapt exercises for participants with acute or chronic injuries or limited mobility. Classes are also taught at a range of levels (beginner/intermediate/advanced) so that each participant can avail of a class suitable for their level. Physiotherapist led Pilates classes aim to help each individual in reaching their full potential regardless of age or ability.

Who Would Benefit From Pilates?

With a range of ability levels and modifications and adaptations available Pilates can benefit a wide range of the population. Pilates classes can improve flexibility, strength, stability, balance, proprioception, body awareness, posture and aid in stress management and relaxation. It can also be fun way to get moving and get your daily dose of exercise in.

We have classes in Oranmore and Galway.

CALL US TODAY on 091 569706, email us info@galwaybayphysio.ie or complete the form below.

You can also book your appointment online for Athenry, Oranmore and Galway City Clinics

If you are unsure of whether or not you are suitable to attend a chartered physiotherapist, feel free to contact us for a free telephone consultation.